Remembering Mani on Her Birthday 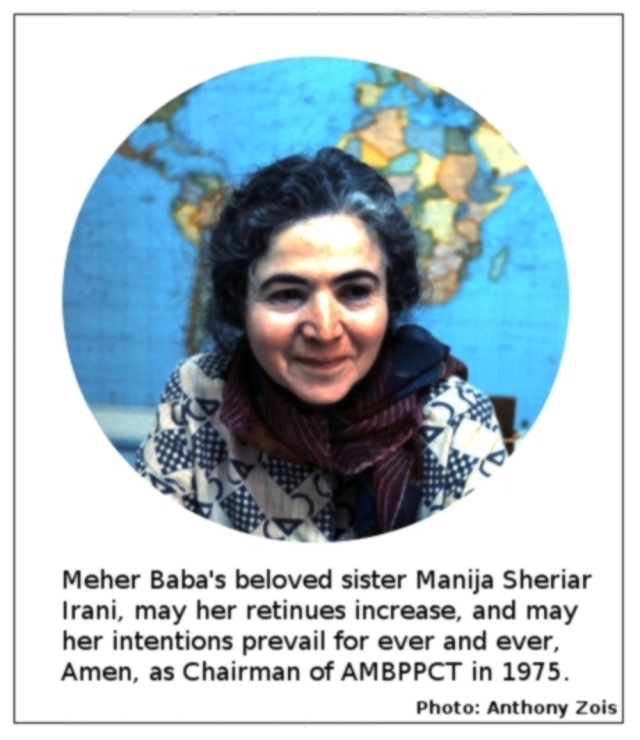 Meher Baba’s sister was the best Chaiman that AMBPPCT has ever had. She was not the first. The first was an individual named Kutumba Shastri who was directly appointed by Meher Baba, but who then flouted Meher Baba’s will after His Mahasamadhi, by denying the Mandali their living allowances that had been set aside for them by Meher Baba in the Trust documents. It was an overhelming group crisis which was resolved by direct action by Mani and Eruch. Eruch found the legal precedent, and Mani forced the turkey out by literally, and very forcefully, sitting in his then falsely assumed seat.

Mani, like Gustadji, Eruch, Bhau Kalchuri, Erico Nadel, and never demeaned enough yours truly, was literally not a Lover of God. She was a Knower (Dnyani) of God. Yes, she loved her Divine brother, but that was not her Path, and it was not how she worked. Mani knew everything. If someone so much as farted under his breath anywhere in Mehernagar, Mani knew it instantaneously. Of course, by default she never mentioned anything that she knew. But she did have her ways of using what she knew to control what went on in Meher country. So under Mani, AMBPPCT ran like a smoothly oiled and squeakly clean machine.

The majority of Meher Baba’s community in Mehernagar are Lovers of God (Bhakts). They don’t know anything, about God or anything else. Ask them, they’ll tell you, and that very happily. In fact, sometimes I think the only thing that entire lot knows is how to divest themselves of all responsibility, in any direction at all, by perpetually proclaiming thier total ignorance and/or helplessness. Bhakts think that that asana makes them more lovable, and sometimes it does, but that depends on what they may be hiding and/or lying about in any given transaction.

Meher Baba famously said, “When not at its height, Love always makes a mess.” It follows that a community of Lovers (Bhakts) will always be a presenting mess, unless there is a Dnyani like Mani either at the head of it or at the root of it.

It was before dawn Hawaii time when I finished composing the above riff in my head, and there was immediately a brief but hard rain shower, not like typical Hawaiian rain at all, but like the Elephant Rain of Mother India. That was like Bhumi Devi confirming the Buddha’s Enlightment, it was the Great Mother saying, “Yes, publish it. They need it, and so do you.”

This site uses Akismet to reduce spam. Learn how your comment data is processed.