On July 8th (1925), Meher Baba convened a meeting of the men mandali at Meherabad and for an hour instructed every person about their duties during the coming year of silence. A few close ones like Chanji, Naval and Abdur Rehman (Barsoap), had come from Bombay to consult with him regarding certain work.

On July 9th, final decisions were made on all matters. Besides verbal directions, general instructions were written down and posted at the Hazrat Babajan school. Behramji was appointed the head superintendant and Rustom K. Irani was named vice-superintendant; together they were to control the management of the of Meherabad property. Arjun Supekar was made the school superintendant and was also given the duty of improving the student’s conduct in class. Gustadji was placed in charge of the storerooms that supplied food for the Meherabad populace and met the various needfs of individuals. Padri’s duty was to supervise the work in the hospital and dispensary.

Only these five men were allowed to speak to Meher Baba at a specified time each day in regard to their assigned duties; all others were prohibited from talking to him. The Master had said that the other mandali could speak to him only when he expresssed a desire, through gestures or in writing, to communucate with them. He has to work the flour-mill two hours daily, and those who were doing this work with him were also not allowed to speak with him.

Meher Baba then gathered the men mandali and spoke to them at length about the future; they listened attentively, since these would be his last utterances for one year. They knew that this would be the last opportunity to hear his voice for a long time. Baba’s last verbal discussion with his mandali covered three topics.

Meher Baba’s general advice to all: “You have to live for others and use your bodies for the benefit of others.” This implied the labor or service the mandali had to continue doing.

Then he explained that one reason for him no longer speaking concerned Hazrat Babajan: “I must keep silence for some excessive spiritual work that will result when Babajan drops her body in the near future.”

He explained that his self-imposed silence related to the future of the world: “There will be religious hostilities, riots, wars, and natural disasters. These events will cause the shedding of blood of millions of people throughout the world in general, and throughout India in particular. But, thereafter, peace and brotherhood will come back into the world.”

Meher Baba turned to Gulmai K. Irani, one of the few women present, and added, “There will be another world war; it will be much more distructive and extensive than the one before. Rivers of blood will flow! I will dip my kerchief in that river of blood and tie it around my head! Not until the world cries out for God will I give up my silence!” ((in general, the world has not yet cried out for God, and Meher Baba has not yet broken this silence he started on 10 Jul 25. – vshr))

The teacher Pandoba then pleaded with Baba that if he became silent, people would no longer have the opportunity of hearing what he had to declare, and the world will be deprived of his teachings. Meher Baba replied,

I have come not to teach, but to awaken!

These were to be his last words to anyone outside of his circle, and this message was the meaning of his divine mission to the world.

((Today, these words are engraved in the marble slab that lies over Meher Baba’s crypt where he is buried inside His Samadhi (tomb-shrine) on Meherabad hill. But what is engraved on the hearts of a renegade Meher Baba Community, and what is publicly flaunted in big red letters in the AMBPPCT administrative coumpound in Ahmednagar is: “Don’t worry, be Happy.” — Vishveshwar Bodhisattva, 10 Aug 13.)) 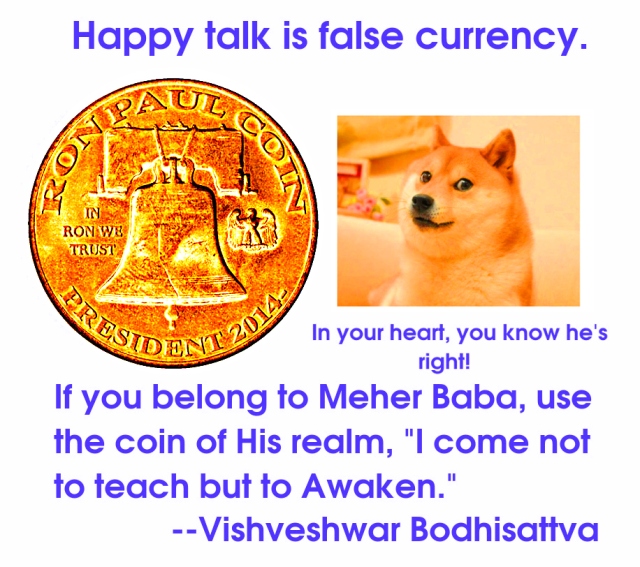 DURING THE EVENING OF JULY 9th, Meher Baba walked to the women’s quarters at the post office building to convey his final instructions: “Now listen to my last words, because from tomorrow I will keep silence for one year. Attend to your duties with love and fulfill them with all your heart. Cook for the children at the school as if they were your own.

“I have much work to do for the world. When my work is done, I shall speak.”

Meher Baba left them at eight o’clock in the evening and, accompanied by Masaji, went to visit the men mandali’s quarters. He told them, “I am going to be silent from tomorrow for one and a half years. All of you take care of everything at Meherabad as usual. And take care of your health.

“Whenever you go out at night, always carry a lantern with you. Always beware of snakes! I will save your from every calamity under the sun, but I won’t help you if you are bitten by a snake. So be careful!

Keep on doing your work. I have given you all of your duties. Continue doing them — every one of you. There will be no hitch in the work; although I will be silent, everything at Meherabad will run smoothly. You don’t have to worry.I have my won reasons for keeping silence. I must do it. Stick to your jobs and do as I instruct you. Don’t deviate from the work and don’t worry about it. If you obey me, nothing will be difficult.”

It was eight-thirty when he concluded: “I am going to the Jhopdi ((Baba’s small hut where he did much of his inner work during that period -ab)) now. All of you go to bed.” There were about twenty men around him. A few men made some comments, and within a few minutes the group dispersed.

The men began unrolling their bedding, and Padri went to urinate. He had only gone a few steps when he spotted a three foot long cobra. Lifting his lantern, he shouted, “Snake! Snake!”

The other men came running with the bamboo staffs, which were kept for this purpose. There was shouting and whacking of staffs as the snake was being killed.

Meher Baba heard the commotion and came out of his hut. “what is all the noise about?” he asked.

“Baba, we have killed a snake.”

“Were you carrying a lantern?” Padri nodded yes, and Baba was pleased that he had done so. Padri then handed him a staff, and Baba smashed the head of the cobra with one blow.

He ordered Padri to wash his hands several times after burying the snake. Then he repeated, “I am warning you all again. Be careful of snakes! Always carry a lantern and take care. Now I want everyone to go to sleep.”

Meher Baba then walked over to the women’s quarters and spoke with them briefly: “How fortunate you are that you have heard my voice so many times today! This incident with the snake took place to allow you to hear me speak for the final time.” He then departed and retired for the night, while Masaji kept watch.

The next day, Friday, July 10th, Meher Baba came out of his hut at five in the morning as usual. After a bath, he went to inquire about the mandalis’ work. All were thinking that Meher Baba would not make his usual inquiries, but surprizingly enough he did — in writing. He inquired by written notes about the mandalis’ work, the schoolchildren’s health and sleep, the food, and the teachers. From that day on, in spite of his silence, the Master was found to be alert and mindful of all matters at Meherabad.

The Word had taken flesh
And now dwelt among us in silence.

Meher Baba never spoke again after July 10, 1925, and every year July 10 is remembered by the lovers of Avatar Meher Baba as Silence Day.

Meher Baba’s method of communicating in silence progressed from writing to the use of an alphabet board, and then to a system of hand and facial gestures which his mandali learned to read, and which was absolutely as fast and effective as speech for purposes of communication. The best and most frequent interpreter of Meher Baba’s gestures was his chief male disciple Eruch. I have heard Eruch in mandali hall say, “We never felt that he was silent.”

Meher Baba’s silence was and is an essential dynamic of his universal work as Avatar. Baba said, “The Age of Reason ((which was kicked off, BTW, by the Buddha -vshr)) is now over, it is time for the Age of Intuition.” This was his work as Avatar; and to do that, the energy of the human race had to be moved out of its verbal mind, and into its heart, in the general case. The Avatar IS the general case; he literally is all beings. So by simply not using his verbal mind for the last 44 years of his incarnation, he caused all of us to stop interpreting ourselves and our experience so much in terms of words. Of course, we all know of people, and of stages in our own cases, which fall short of this. But in general, we’re just not living in the Age of Reason anymore. It just isn’t happening, and this will become more obvious through time. The Age of Intuition is already our cognitive reality. That we may not be good at interpreting it as such yet is beside the point. You can’t be sort of intuitive. That’s like being sort of American, or sort of female. You either are or you aren’t, and in general, we are. Baba said that intuition is the result of speeding up the heart and slowing down the mind, until they come into balance. This applies to everyone, and he already did it for everyone. We just have to make our peace with it, and then the confusion and craziness can cease, please!

In Hawaii, which never even really arrived at the Age of Reason in the first place, this is more obvious than it tends to be elsewhere at this point.

2 Responses to Meher Baba’s Last Words Before His Silence

This site uses Akismet to reduce spam. Learn how your comment data is processed.